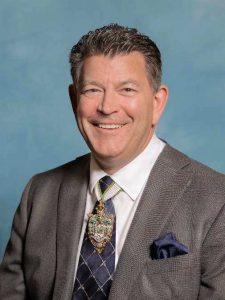 James Tear is Chief Executive of The Solpro Group and a “proud metal basher of this parish”.

The Solpro Group includes Thessco, a private family-owned precious metal engineering business founded in 1760 and one of the world’s largest manufacturers of Silver Brazing and Industrial Silver Alloys. With its main manufacturing and sales facility in the traditional engineering heart of Sheffield and a further sales and distribution centre in Paris, Thessco exports its specialist alloys to customers in over 50 countries throughout the world.

James is born and bred in Sheffield. He was sponsored through UMIST by Lucas Aerospace, where he apprenticed throughout his studies. On leaving University in 1990 he joined Thessco and, having been “encouraged” by his father to start at the bottom, he undertook a further two-year apprenticeship programme. Over the last 30 years James has played a key part in the growth of the business including the incorporation of the European facilities into the Group.

James has been a Freeman of The Cutlers Company since 1995 and a Member since 2004. In this role, James has participated on several committees and the one that is particularly close to his heart is Education and Skills, where he has been involved in helping deliver the Better Learners Better Workers education programme, since its inception in 2012. Being the Business Champion at Stocksbridge High School was a particular highlight, and he continues to remain involved in the programme today.

With his father, Paul Tear, being the 359th Master Cutler in 1997/8 and with one of the few remaining cutlery and silverware factories in Sheffield, now owned and run by his sister Jackie, James is also cheeky enough to call himself a Cutler.

Away from his business commitments James is married to Jo who is also involved in the business. Their eldest son is an Officer in the Yorkshire Regiment, their middle son, having recently graduated from Edinburgh University, has just started work in London and their youngest son is at Liverpool John Moore University.

James is a keen fly fisherman, skier and supporter of rugby. As part of his midlife crisis, James is currently restoring a 1960 Series 2 Land Rover which he hopes to have completed, “in the very near future……”

James and Jo are excited to support the charity Cavendish Cancer Care during their year in office through the Master Cutler’s Challenge and championing the fantastic work they do.